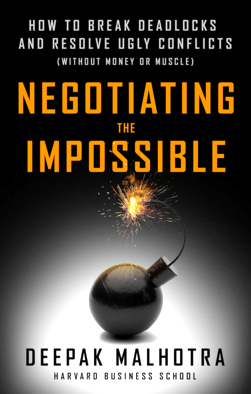 Reviews of the book

"Easily the best negotiation book I have ever read. If you are involved in high-stakes negotiation, Negotiating the Impossible will give you actionable non-intuitive ideas that will positively impact your future. "

"Deepak Malhotra has done what few others could do: he draws upon the lessons of history to demonstrate that even the worst conflicts can be resolved.  This book is especially significant because it gives both the inspiration and the tools you need to tackle extremely difficult negotiations."

“Professor Malhotra is a rare academic with real expertise in the world of negotiation and diplomacy.  He gets his hands dirty and has worked behind the scenes on some of the most difficult negotiations of our time.  Professor Malhotra sees what others don’t see—and he has written it all down in Negotiating the Impossible.”

“Packed with practical principles and illustrated with compelling examples, Negotiating the Impossible is one of the most useful and enjoyable negotiation books you will ever read!”

— William Ury, Co-Author of Getting to Yes

“If you want the best advice on how to negotiate when it looks like a deal can’t be done, then Negotiating the Impossible is a must.  It’s filled with great strategies you can immediately put to use in your business and personal lives.  It’s also an extremely entertaining, thought-provoking book that you won’t want to put down.”

“Negotiating the Impossible is a tour de force. Professor Malhotra is both a leading academic and an amazing storyteller; he has also been in the trenches and knows first-hand what it takes to tackle even the most difficult of situations.  Whether you’ve done one deal or a hundred, this book will change how you negotiate.  I will be giving it to everyone on my team.”

"Negotiating the Impossible delivers on its promise. By using historically significant, seemingly intractable negotiations as examples, Malhotra provides practical lessons for the everyday negotiations in your life — including the three surprising "levers" at your service when the use of force is not a viable option.  This book is magic for any deal-maker."

— Daniel H. Pink, author of Drive and To Sell is Human

“If only we could lock the world’s leaders in a room to read this book. Professor Malhotra’s analysis of how negotiators can achieve the best possible outcomes for all sides is revelatory.  It also starkly highlights what’s missing in current negotiations – whether on refugees, on peace in Syria, or on Eurozone debt. This is a must read for all practitioners of politics and public service.”

— Ngaire Woods, Founding Dean, School of Government at University of Oxford; Advisor to the IMF, UNDP, & Commonwealth Heads of Government